We have a collection of early spring bloomers in our backyard, a mix of imported and native species. Right now, there are several penstemon species, aloes, creosote and brittle bush in full bloom.

Parry's Penstemon is a native species. It can be found in many sandy washes of the Tucson Mountains and beyond. In our garden it is blooming in direct vicinity of several showy Aloe species. 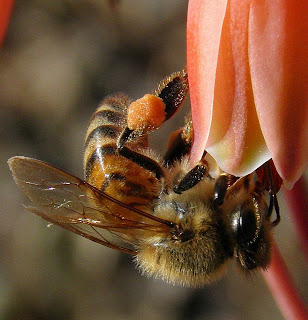 The imported Aloes attract the equally imported Honey Bees, and birds who are not very fussy when it comes to sweet juices. 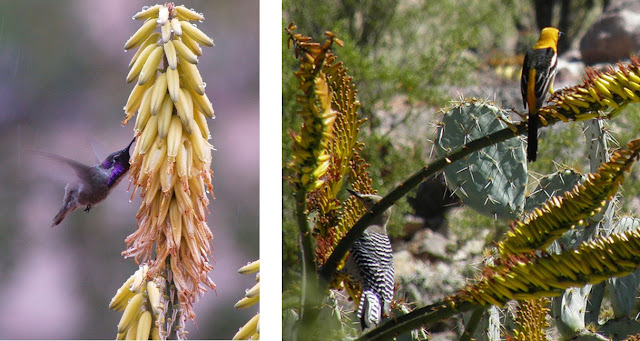 Hummingbirds, Gila Woodpeckers and Orioles are frequent visitors. But the native Parry's Penstemon is visited by local specialists. 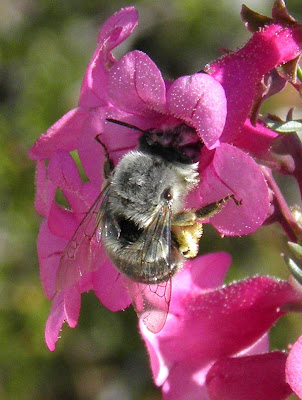 Habropoda  and Anthophora Bees hover from flower to flower, land, and are gone again. Every flower seems to yield  only a very small amount of nectar. This makes life difficult for macro-photographers, but even more so for the bees.

This becomes obvious when the sun disappears shortly behind a cloud resulting in an immediate drop in temperature. Some bees keep going and going. But others soon drop out of the race for nectar. They clamp their mandibles on a leaf or a stem, tuck their legs and rest motionlessly. I can see that they do not carry any loads of pollen, and when one finally starts moving again I see a flash of white from the face: the bees that take brakes seem to be all males. They may stop flying when the temperature drops and they would have to spend extra energy on heat production to keep their flight muscles operative. For males this expenditure may not be worth it. The resting individuals also looked old and ragged. Maybe they have done their duty. 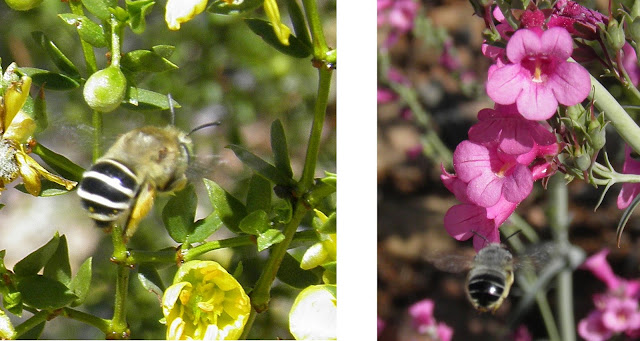 The pollen loaded females who are provisioning their nests seem to have reasons to invest more energy and keep flying, at least at our only slightly sub-optimal temperatures.
Habropoda  and Anthophora are Anthophorine Bees with very long togues (0.4 to 0.8 inches) that enable them to pollinate deep flowers (O’Toole & Raw 1999). Adapted to both temperate and tropical climates Anthophorines are wide-spread, but in the US most abundant in the West and Southwest. They are called mining bees because they are solitary ground nesters whose females dig tunnels in the soil to accommodate a series of brood cells. The cells are lined with an oily substance for protection against moisture and fungal infections.

While watching the bees for hours on several days I saw very few honey bees visit the Penstemon, but quickly return to the aloes. The native Habropoda  and Anthophora Bees completely ignored the aloes and concentrated on just one species of penstemon and the surrounding creosote bushes. Every evening, when it's too cool for most bees, a big female Carpenter Bee also harvests pollen from the creosotes. I will have to use a flash to get her photo.

Posted by Margarethe Brummermann at 8:54 AM