My friend Rich Hoyer had warned us via facebook for a couple of days: move the hummingbird feeders inside over night, or they will turn into blocks of ice. Ours are under roof overhangs,  the birds were still feeding after sunset, and later it was too cold and dark to climb up to get the feeders down ... so this morning hummers and Gila Woodpeckers looked quite unhappy and we quickly filled our spare feeders to bring outside. Now there are much more hummers feeding than I had seen for weeks.

In the backyard, a male Costa's guards a feeder from his perch in a Creosote Bush. He is confident enough to let me push my camera in his face. Yesterday I was only half a meter from him using the macro setting and he kept coming back to his perch and my camera after short feeding and fighting forays. 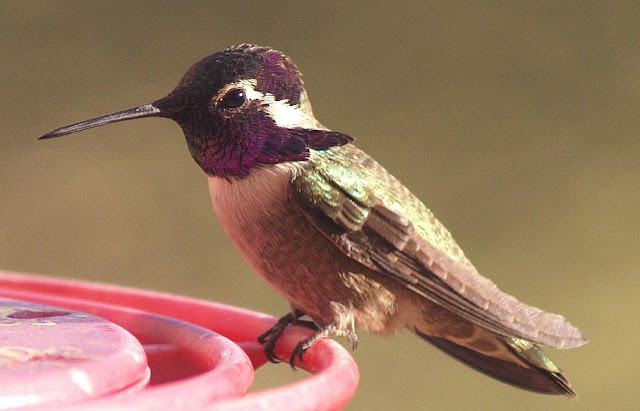 Around the corner of the house, right in front of my studio window, resides as Costa male with a gorget that resembles the beard of an old-fashioned Turkish Bey and the attitude of a territorial pit bull...He routinely threatens Randy when he hangs the laundry. 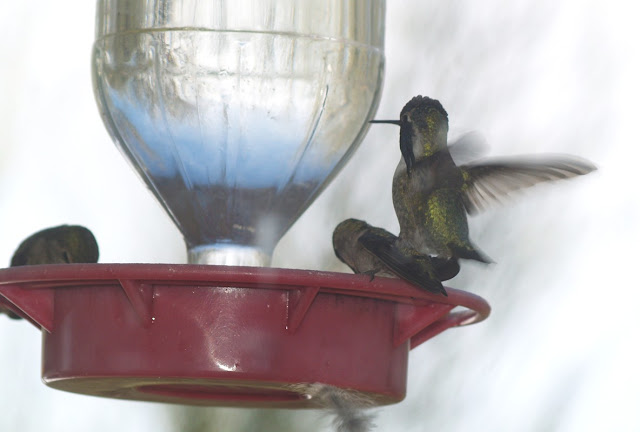 Today several females are trying to use 'his' feeder. They are hungry and determined to stay. He attacks them in a peculiar way. He grabbs the neck feathers of a drinking female with his beak and pulls. When she ignores him, he lands on her back. I looks now more like a mating attempt then a feeder defense. Please see the video here. As the day progressed the male's approach became less aggressive and clearly more sexual. The females still ignored him if they could: they kept feeding.
Of course, I can't tell whether the females are even Costa's. I also don't know whether this feisty guy would care. I do know that ethologists see an evolutionary connection between aggression and sexual behavior...
We have been hearing the sharp whistling of the male Costa's display for a couple of weeks. I haven't found any nesting attempts yet, but the tiny nests are easy to overlook. But I guess it's too early. Rich looked up when egg laying could begin: According to the Birds of North America species account, egg laying begins in March here, but the Breeding Bird Atlas says February, with January 20 being the record early. 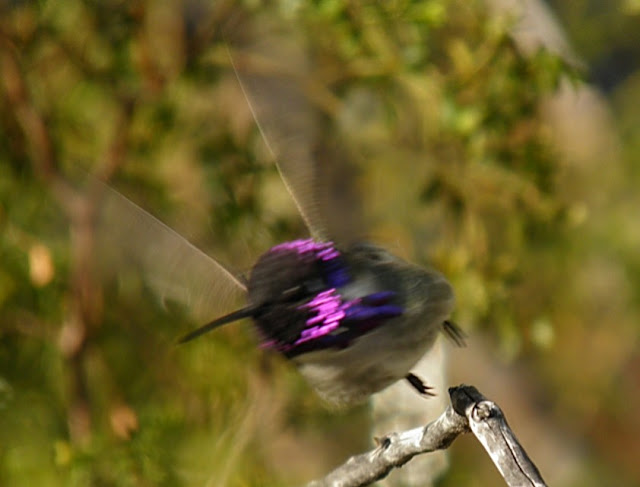 With a nice flash of those structural colors (as opposed to pigments) of his gorget: Blurr and out!
Posted by Margarethe Brummermann at 11:01 AM