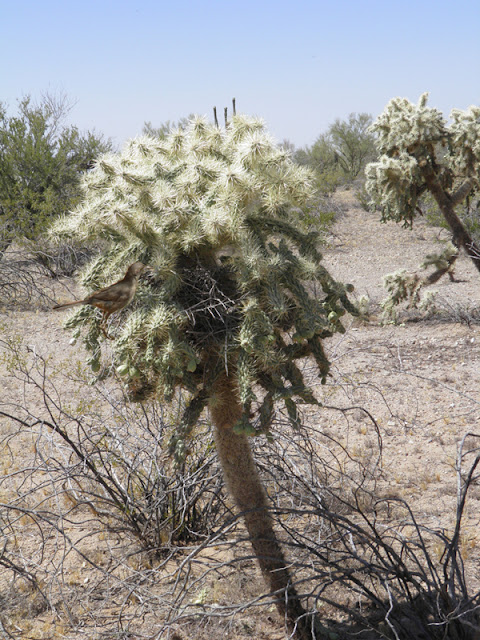 Yesterday I watched a male Curve-billed Thrasher bringing food to his nest in a Cholla Cactus. I was surprised to find the female actually on the nest, even though the chicks were clearly big enough to make a lot of noise. Her feathers were all fluffed up, the wings spread out, and she was panting strongly. 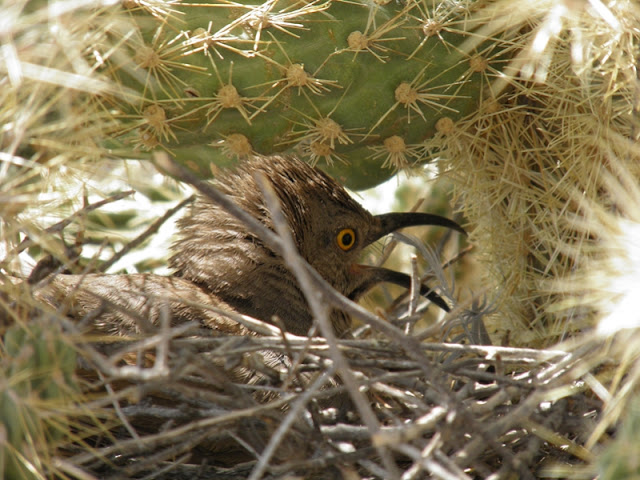 But she kept her chicks tightly covered by her body. At least until they heard me and worked their way out from under her wings to start begging with wide open yellow bordered beaks. 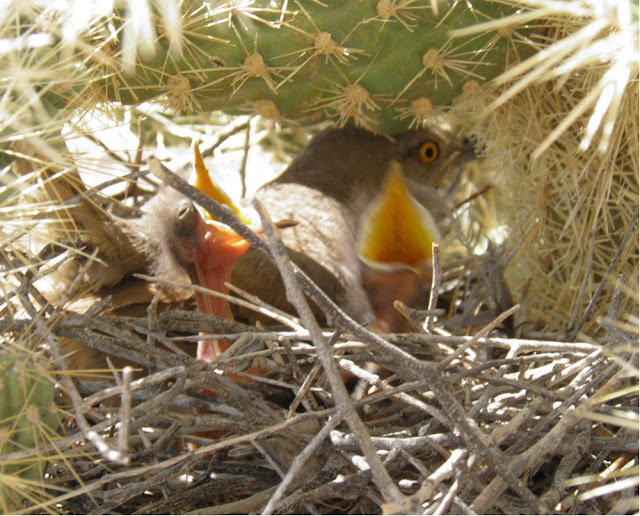 Like mammals, but unlike most other animals, most adult birds are homeotherm (with a few exceptions like hummingbirds and swifts undergoing temporary states of torpor) which means that they regulate their body temperature (42C or 105F in birds). To achieve this, they have to  maintain a constant equilibrium between  metabolic heat production and heat loss to the environment. Behavior is an important element of their thermoregulation, like seeking sunshine or shade. But birds and mammals have a great, if costly advantage over ectotherm animals like reptiles: they can regulate their body temperature independently of the environment through autonomous mechanisms. If the heat loss is greater than the resting heat production, muscle shivering is used to increase heat production. The insulation of the body is adjusted through changes in feather or hair position (piloerection) and altered blood flow to the skin and extremities.
With high environmental temperatures or during high physical activity  birds and mammals need to get rid of excess metabolic heat. They do that they employ evaporative cooling. Birds have no sweat glands, so their main cooling mechanism is the gular flutter  (vibrating the thin, highly vascularized skin of the neck in the breathing airstream) and panting. Avian thermoregulation is very efficient and allows birds to inhabit a wide range of habitats from the arctic ice to the Sonoran Desert heat. 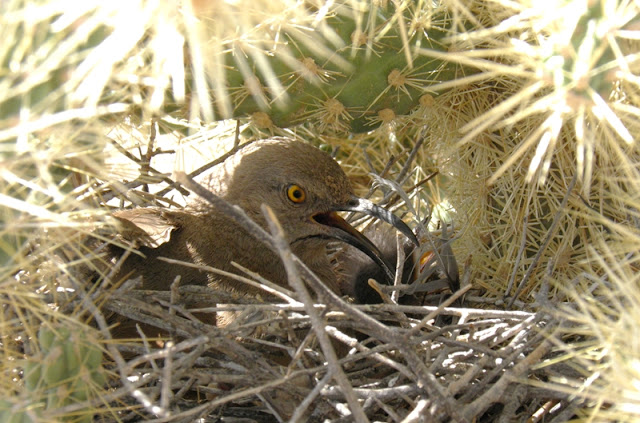 Developing eggs and young chicks (of the non-precocious species) need to be kept at the same core temperature of 42C for optimal development, but their regulatory systems are non-existent or underdeveloped. So the incubating parent has to provide the temperature regulation for eggs and young chicks. "Broody" birds develop special brood patches for this transfer of heat from their body to the eggs. In these areas of the bird's chest (abdomen and legs in Penguins) the feathers fall out to minimize the insulation between bird and eggs and an extensive vascular network develops in the skin because it is the blood that moves the bird's inner metabolic heat to the periphery and thus to the eggs. This is incubation as we people from temperate climates understand it. 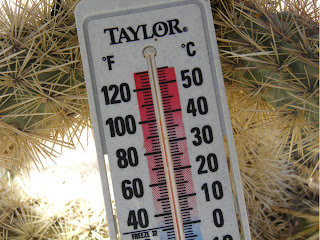 At high-noon in  May and June in Tucson you could literally fry an egg on the sidewalk (if there was one). At 3 pm I measured the temperature in a cholla next to the nest: just about 100F. A few degrees below the temperature of the fully sun exposed surroundings, but still too high for chicks with no insulation and an immature thermoregulartory system My thrasher demonstrated that under heat stress, the incubating bird actually provides cooling to the nestlings by using her own evaporative cooling system and keeping close contact with the chicks. During the hottest part of the day she was so reluctant to leave them that I could have touched her. 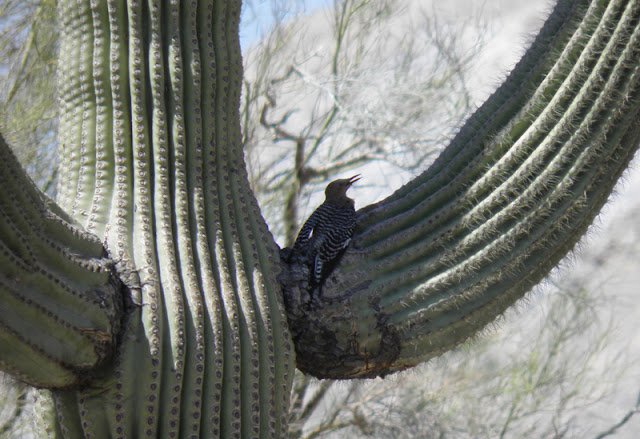 Cavity breeders like woodpeckers and our kestrels have chosen a quite controlled environment for their off-spring. Especially when the cavity is in a saguaro, which is really just a massive column of water, nest temperatures stay much higher than the cool desert night and up to 25C under the outside temps when the afternoon sun heats the desert to triple digits (E.J. Braun, 1987). The Gila Woodpecker female above also has chicks, but since the temperatures climbed over the 100 mark, she regularly waits out the hottest part of the afternoon outside the nest in the shade. 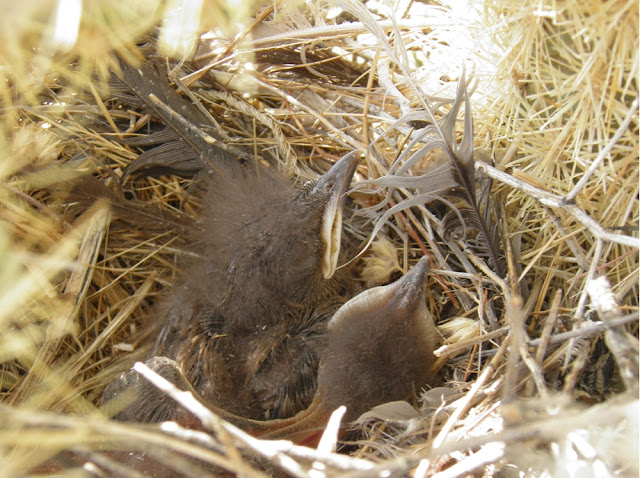 I went back to the trashers around 5:30 pm when the sun was lower and temperatures in the mid nineties felt quite pleasant to us Arizonans of over ten years. Sure enough, the chicks were sleeping in the depth of the scruffy nest bowl. 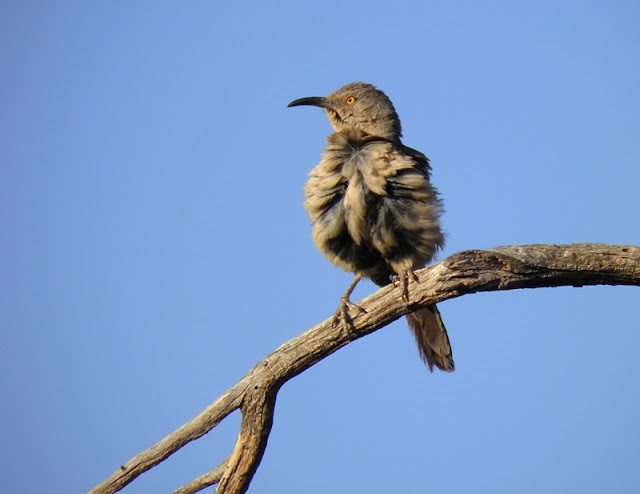 In a nearby tree the mother was preening her disheveled feathers and then took off for a drink from some saguaro flowers. She also regularly frequents the birdbath/quail block station in front of my studio window just around sunset. For at least the next three days, while temperatures were raising, the bird kept the exact same schedule. During this time the chicks grew in size and feathering at an amazing speed. 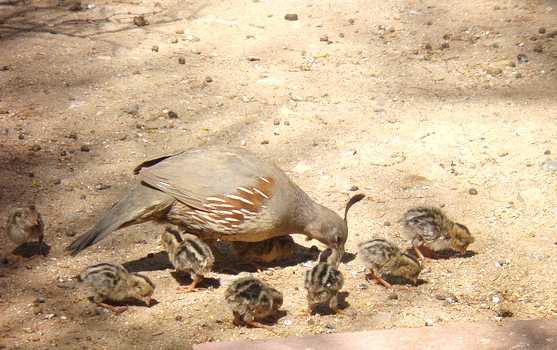 Galliform birds like quail use a different incubation trategy: Their precocious chicks can follow their parents within the hour after hatching. They are feathered,  can move to optimally shaded micro-environments, drink water, and do most of their thermoregulation by themselves.

But even in this harsh desert environment all kinds of niches are used and the success of doves and thrashers who breed in the most obviously exposed nesting sites seems surprisingly high.

.
References: Metabolism and Water Balance of the Gila Woodpecker and Gilded Flicker in the Sonoran Desert. EJ Braun, University of Arizona Press, 1969
Posted by Margarethe Brummermann at 5:08 PM