Grasshoppers and Katydids of the bajada of the Tucson Mountains

Yesterday I rescued a Creosote Bush Katydid (Insara covilleae) from drowning in our dog bath. We actually find both Western Bush Katydids, I. elegans and I. covilleae on our property, mainly at night around lights. We have many Creosote bushes and enough Mesquite trees to keep both species happy.

Earlier in the year the Creosote Bushes, which seem so well protected by their load of strong smelling volatile oils, were also frequented by the little Desert Clicker (Ligurotettix coquilletti) and the Creosote Bush Grasshopper (Bootettix argentatus). Fittingly, the gray Clicker spent most of his time on the branches. During day and night, the males constantly made their short little noises, not really a click but more a short two syllable rasp. It took me a while to find the first one,  but then I discovered exactly one on every bush: they seem to have their defined little territories. They actually face the observer without fear and a lot of attitude.

By contrast, I have never been able to find a green and white Bootettix argentatus actually on the Creosote foliage, they are just too well camouflaged. Those little white markings, just like those of  I. covilleae not only break up the shape but also resemble the reflection on the shiny creosote leaves. But sometimes B. argentatus comes to my black light. I have kept the grasshoppers in a terrarium for several weeks. With voracious appetites they devoured nothing but leaves and green twigs of  Creosote. Their enclosure and the whole room soon smelled of desert rain and cough drops.

All four species introduced in this chapter belong to the order Orthoptera. They  have the characteristic long hind legs that allow grasshoppers, katydids and crickets to jump long distances when disturbed.
They are members of the two big suborders of Orthoptera, and below I will try to explain their differences: 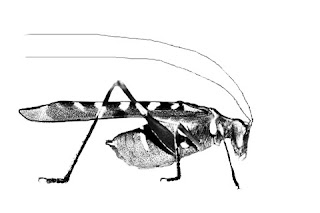 The two Insara species represent the suborder Ensifera. Katydids, Crickets. All members of this group have very long, thin antennae. Adult females have external, long ovipositors (the swords that the name Ensi-fera, sword carriers or rather makers refers to). The males are the great musicians of the insect world, producing species specific mating songs by stridulating with special structures of the veins on their front wings. Of course, animals using songs for communication also have sensory organs to receive sounds. In Ensifera, these tympana (Eardrum like organs) are located in the front tibiae. 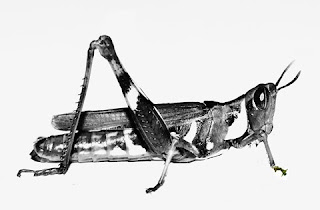 Desert Clickers and Creosote Grasshopper are examples of Caelifera, the suborder of the Orthoptera that contains the Grasshoppers and their short horned relatives. The lubbers that were featured in an earlier blog are also part of this group. Caelifera also use acoustic signals as calling songs for mates and for territorial displays, but their sounds are far less musical than those of the Ensifera. They use various body parts for stridulation, like rubbing the hind femur against the forewing or the forewing against the hind wing. Here is a video of the Desert Clicker calling: http://www.youtube.com/watch?v=BYhcfGr8nTc , demonstrating the first version of stridulation. In grasshoppers the tympana for sound reception are located on the sides of the first abdominal segment.

Yesterday, I went to Las Cienegas to find more hoppers of the grasslands and this evening I listened to the Tree Crickets along the Santa Cruz River in Marana. In late autumn in Arizona, Orthoptera are definitely among the most active insects and I will soon have some more blog chapters devoted to them.


Posted by Margarethe Brummermann at 5:27 PM