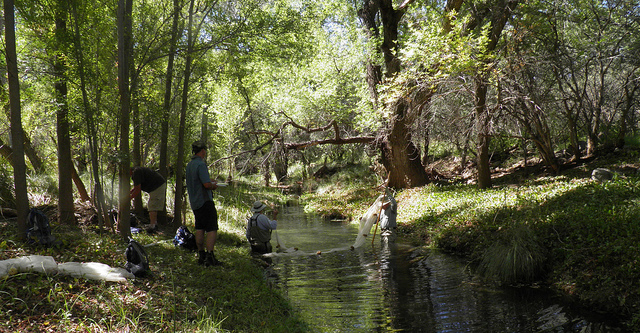 Thanks to Bob Beatson, last Tuesday I had the opportunity to tag along with Jeff Simms (BLM), Ross Timmons (AZ Game and Fish), Adam Barkalow and Bob for a part of the annual BLM fish survey of Cienegas Creek. This creek flows through the rich grassland of the Empire State Ranch (now BLM). The creek is clear and fresh and seems to find an ever-changing bed under the shading canopy of mostly Cotton Wood trees. The creek varies from a few feed in width, easily stepped over, and flat areas with lively ripples to wide quiet pools that are over five feet deep.
Under BLM management that reduced the grazing impact, the ecological health of this little creek has actually been improving over the last years. This maybe a unique situation among Arizona riparian habitats. But the planned site of the Rosemont Coppermine is not far away, just across Highway 83. If those deep pits go in, water flow of this watershed may reverse its direction and that would be the end of this paradise. 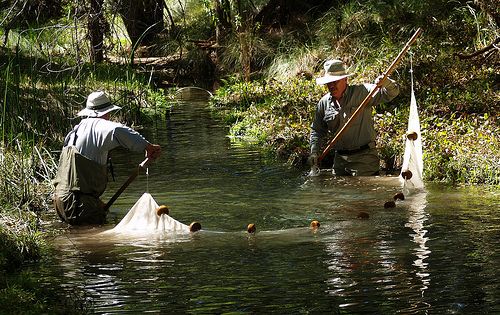 Seining is hard work. I was impressed with the organized protocol and efficient teamwork of the group of biologists, and even more with their obvious enthusiasm  for this beautiful habitat and its creatures.
The fish were of three native species: Long-finned Dace, Agosia chrysogaster, Gila Chub, Gila intermedia, Gila Topminnow, Poeciliopsis occidentalis. The species, though their niches overlap, seemed to favor different conditions concerning temperature and light (canopy cover), cover within the creek, flow velocity etc. I did not learn to identify the distinguishing features of  the species because the fish  had to be returned to their element as quickly as possible. Bob used a smal tank to take photos. Maybe he'll share some images with this blog later.
To everyone's relieve, no exotics like for example Mosquito Fish were found. The competitive pressure of introduced species is a great problem for native fish in most other Arizona streams and creeks.

The insect fauna of this beautiful intact riparian area seemed extremely rich, even in October. I was not well equipped to capture any comprehensive records, but this visit was hopefully just a first glimpse.

Several interesting species of darners (that I wasn't familiar with) were patrolling along the creek, but I only got a photo of the a very common one. 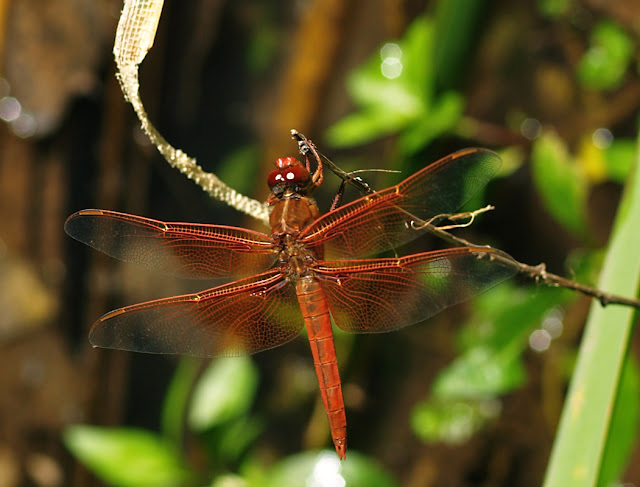 Libellula saturata, the Flame Skimmer stayed rather close to the water and several males kept coming back to their individual perches.

A smaller red dragon and his yellowish female frequented the riparian forest, but came out into the open grassland in the late afternoon when it got cooler and shadier under the trees. I chased them for a long time before I got identifiable pictures but it was worth it, as the distribution of the Spot-winged Meadowhawk is only a tiny dot in SE Arizona in Sidney Dunkle's Dragonfly book. 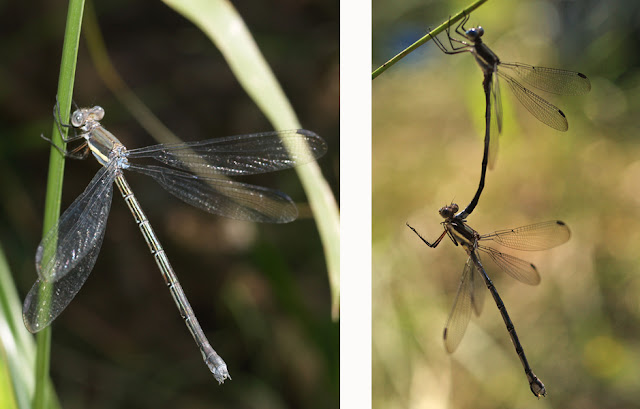 Spreadwings, Archilestes grandis,. were still mating. Above a female and a pair in tandem.

I was told that there are Clubtails at the creek, and we may have seen some larvae. We also found larvae of Stoneflies (we thought) and some unidentifiable Diptera larvae clinging to the underside of rocks. I really need to figure out how to take images of wet, reflective subjects in dark places that require a flash. 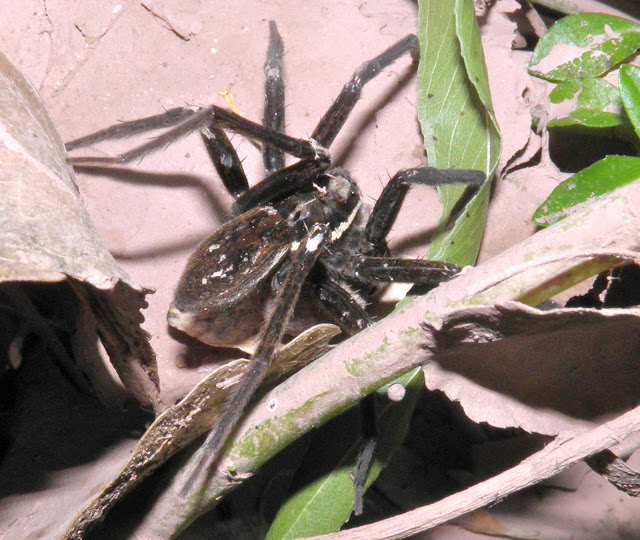 Big Fishing Spiders (Dolomedes triton) scuttled out of the way all along the creek. 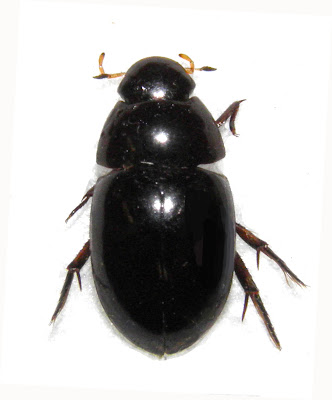 There were scores of small Whirligig Beetles (Gyrinus sp.) dancing in sunny spots. I mistook the one smooth black water beetle  for a Dytiscid until I had it at home and it showed its clubbed antennae: Tropisternus ellipticus, a Hydrophilid.

The most prevalent group: Orthoptera, the Grasshoppers and Katydids. I counted at least 15  species between the grassland of the ranch, a rocky slope on the way, and the true riparian meadows. Here is my flickr gallery of Las Cienegas Orthoptera. I have added a few images from other locations of species that I identified without doubt but didn't photograph.

I found only a few terrestrial beetles, some small Epicauta, The Long-horn Sphenotecus bivittata, and very few Carabids under dead wood. The area had been upset by recent violent floods and many ground beetles may have been flushed out. On high ground a number of Pinacate Stink Beetles Eleodes longicollis appeared just before sunset. From herbs in the grassland I swept big numbers of Striped Ladybugs, Corn Root Worm and,  closer to the river the Melyrid Collops grandis. Please visit my Flickr gallery for more pictures. 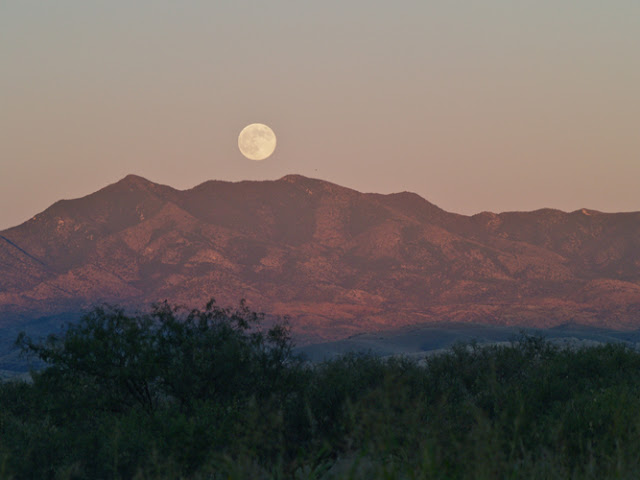 On the way home deer and  coatimundi watched our trucks rumbling by, more curious than afraid, but not obliging for a photo....
Posted by Margarethe Brummermann at 4:13 PM