During every good summer monsoon the Desert Broom bushes (Baccharis sarothroides) in Madera Canyon (Santa Rita Mts, AZ) start, whether spontaneously or caused by gnawing bug mandibles I do not know,  to ooze sweet phloem juices from their stems, attracting many paper, spider and  thread-waisted  wasps, leaf-footed and stink bugs, scarabs, and most impressive colorful big long-horned beetles. 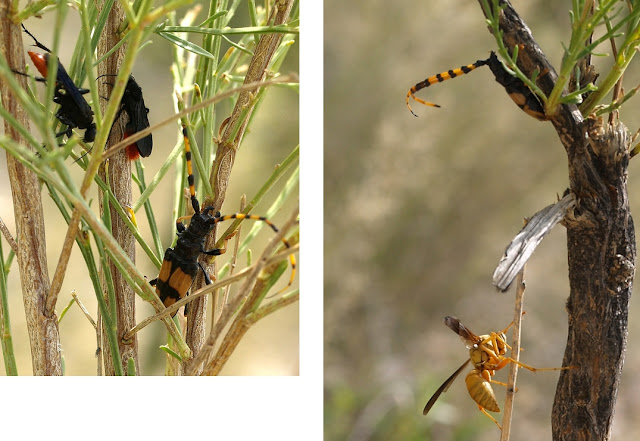 I have documented this event every summer since 2007. I often found and photographed the 'big three' longhorns that are common in our area: 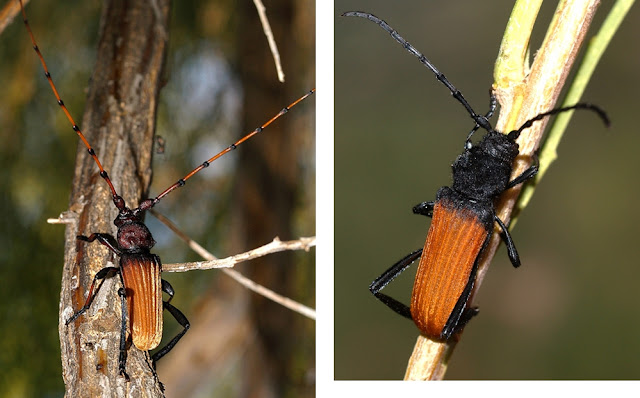 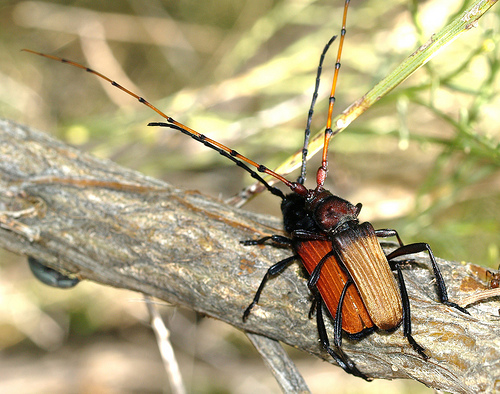 Tragidion densiventre was formerly T. annulatum but the genus recently underwent a revision. All the males that I saw had ochre colored lower elytra and enormously long banded antennae, while most of the females were red and black with a very fuzzy pronotum and shorter solid black antennae.

Trachyderes mandibularis seems to appear somewhat later than the Tragidions. The males have huge jaws that look more useful for interspecies fighting than bark-gnawing, but I have never seen them attack each other. Smaller males do seem wary of bigger ones. All individuals of the species are always prepared to quickly take flight which goes well with their wasp like black and yellow pattern. 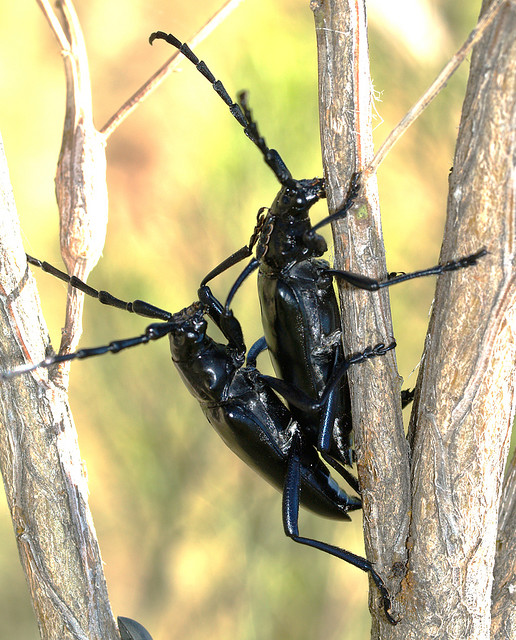 The big solid black Stenaspis solitaria is the most common of the longhorns. They can be seen flying  between desert broom bushes where they snack and meet their mates and the Velvet Mesquites trees  that are hosts for their larvae.

From other collectors I had heard about another,  metallic green Stenaspis, S. verticalis. Fred Skillman described how he found one last summer, recognizing it just from its antennae that protruded from the Baccharis branch that hid its body from view.

When I looked up the species in our University collection (UAIC) I found that the black S.solitaria specimens fill more than a drawer there, but all green S. verticalis specimens fit into just one unit tray.

Last Saturday evening a threatening thunderstorm drove me from Box Canyon into the safer Madera Canyon. I stopped at the little abandoned visitor center where only a few desert broom bushes survived last years attack by irresponsible collectors (Supposedly some interesting cerambycids develop in Baccharis branches and lay waiting in their pupal cradles, ready to 'pop' or to be excavated by some over-eager human.)
As usual, all the bug action was concentrated on just one old bush. Actually action is the wrong term. Chlorion wasp, Giant Agave Bug, Western Fig Beetle and a pair of Tragidions all perched peacefully sleeping close to the source of sweet juice. 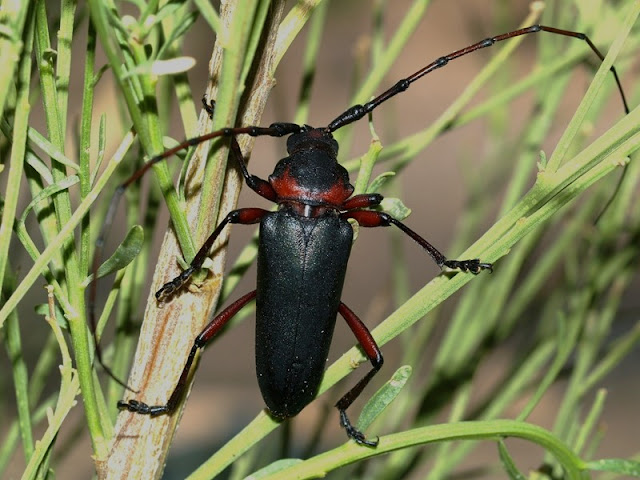 I nearly disregarded a big dark Stenaspis on the same branch, until my flashlight beam fell on its red rimmed pronotum and legs. I still wasn't quite sure that it wasn't just a teneral S. solitaria because I had expected S. verticalis to be much more metallic and green. 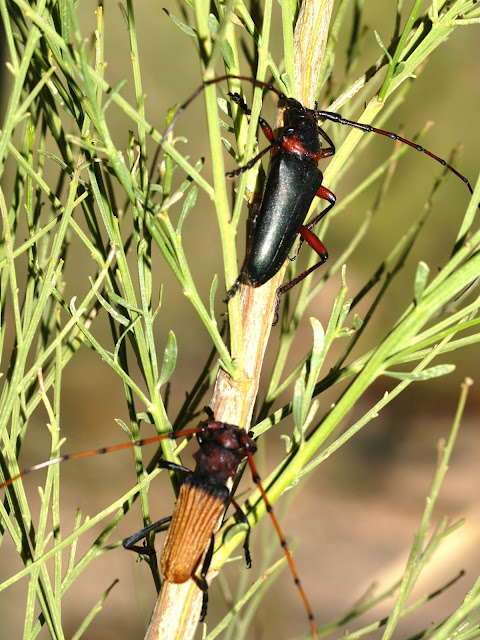 During the day I would have been afraid to loose the beetle if I spend too much time taking pictures, but on that rather cool evening I even dared to wait for the Tragidion to crawl closer to the Stenaspis to have them both in one shot.
While taking those pictures I nearly lost my truck and had to be rescued by the famous bat and hummingbird photographer Bruce Taubert, but that is a different story....


Posted by Margarethe Brummermann at 6:49 PM