Even though grasshoppers and their growing nymphs can be found in Arizona at all times of the year, they really seem to dominate our insect fauna in late summer and autumn. Our local species hardly ever develop population densities that would induce them to turn into wandering bands of Locusts, but when you walk through grass land or brush a few of them seem to jump up under every step.

Because of their size, the heavy-built Lubbers or Romaleidae are especially conspicuous (Two immovable spines on the hind tibia separate them from Acrididae who have only one spine, but mostly they can be recognized by their large size and lumbering gate).
So far, I have found the three species shown above in southeast Arizona. I am still hoping to find the Furnace Heat Lubber, Tytthotyle maculata, and the rare Spanistic Desert Grasshopper, Spaniacris deserticola, both in western Arizona.

The strange looking  Chihuahua Lubber is the rarest of the species that I found. It occurs in early summer in rocky or gravelly arid areas from the lower desert elevations up to the oak and juniper belt of the mountains. 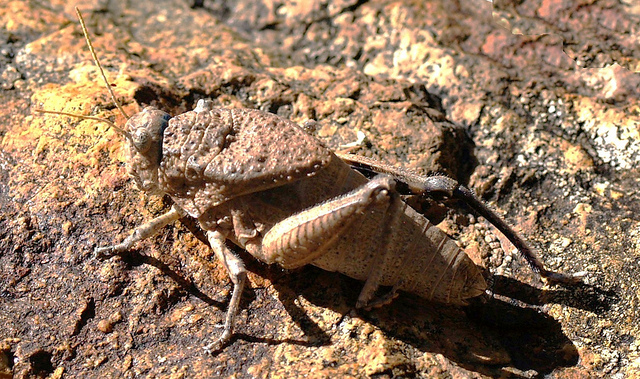 Their compact shape, brownish color, and warty surface hide the flightless lubbers very well in that environment. It took me years to find my first one in Brown Canyon in the Baboquivari Mountains, but then, after having established a search image, I also found them in other places like Canelo Pass south of Sonoita and Florida Canyon in the Santa Ritas. Our Chihuahua Lubber is considered a distinctly different species from the Robust Toad Lubber, Phrynotettix robustus that is found in Texas.

The Plains Lubber has a wide, but patchy distribution. This year they seemed to be a banner year in southern Arizona, with big males basking in the sunshine wherever sunflowers or rabbit brush lined the road sides and even mated pairs slowly crossing the roads. 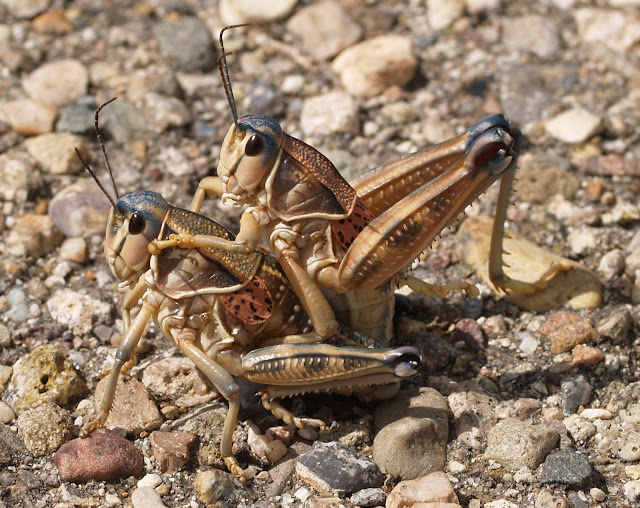 Eggs are laid in the ground in pods of about 20. In a the USDA study the eggs needed two years of incubation and over-wintering before hatching. Field observations of population peaks in alternate years support the hypothesis of a two-year life cycle. 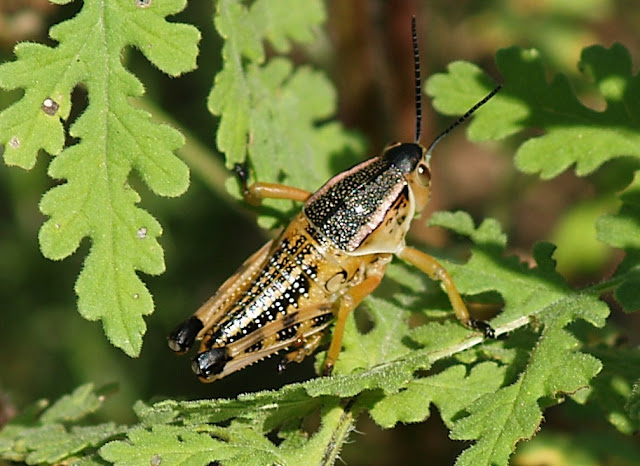 The nymphs hatch wingless and undergo five molts before they mature. The adults have only very small non-functional wings and their only means of dispersal is their lumbering walk and slow jumps. They feed voraciously on many different plants but seem to prefer the sunflower family. Only rarely do they venture into cotton fields and do some damage to the crops. Mainly phytopagous, they supplement their diet by scavenging and have been observed to kill  and eat smaller grasshoppers.

The Horse Lubber Taeniopoda eques is locally known as Mexican General. That's because of his bold aposematic coloration, over 3 in length and stately movements. In some years in October, when the lubbers cross the roads to Madera Canyon and Mount Hopkins by the hundreds they look like an army on the march. 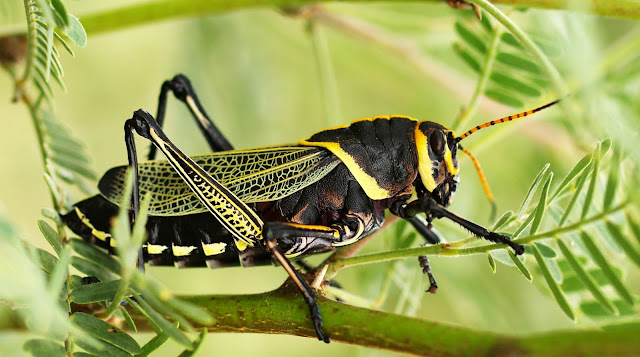 Horse Lubber Taeniopoda eques female
This female is roosting high in a mesquite tree before night fall. Most likely, this will allow her to catch the early sun shine to warm up and get active quickly in the cool desert morning. It's October!

Although many of the males have functional wings, they rarely fly. Instead, they use their wings in a defensive display when they are threatened. The flashing of the red hind wings is accompanied by clicks from the front wings and hissing. I addition, they may exude foul smelling froth from their thoracic spiracles (breathing openings). 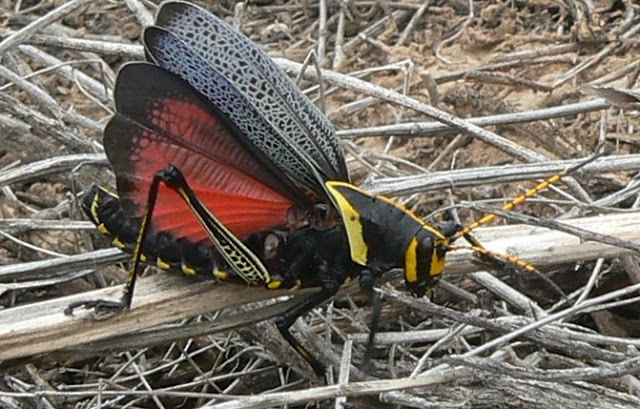 Judging from the numbers of Horse Lubbers that walk around openly and unencumbered by birds or other predators,  the strategy is working. However, many get run over by even the most respectful drivers. Any roadkill is immediately cannibalized by the survivors, often resulting in another series of traffic calamities.  Otherwise, they feed on the foliage of Mesquite and other brush and broad-leaf  weeds. 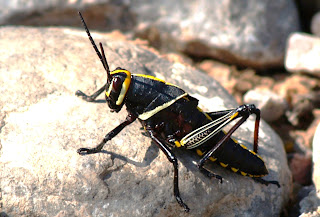 Early instar nymphs tend to stay together in groups. I have found them in early to mid August and the adults as late as the end of October. 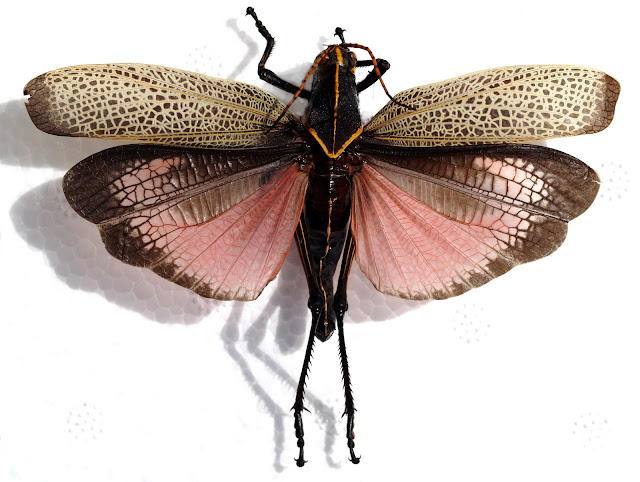 Some folks really know how to appreciate our Lubbers! This Plains Lubber photo was sent to me from Prescott after this blog helped with the introductions! 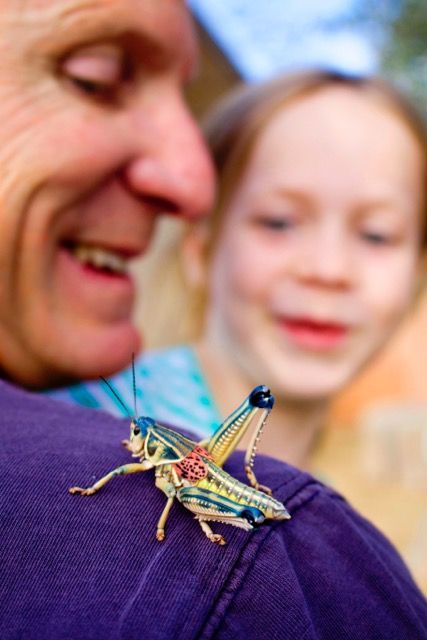 Posted by Margarethe Brummermann at 12:07 PM